“I think I broke a grad student today,” I said to Mr. T, walking in the door from my night class.

It was early last semester, and we had been discussing theoretical traditions and paradigms. Like the good professors before me, I asked my students to articulate which paradigms they particularly identified with and why.

My little band of students (indeed, there were only five) discussed their favorites, several claiming interpretive, critical, and postmodern paradigms at once.

As the conversation progressed, I asked how those paradigms fit together. What would the scholars they read about think of them claiming so many?

Later in the evening, in response to my prodding efforts to get them to take a stand, one dear student said something like, “All of the paradigms are important and valuable.”

“All of them?” I queried, replying with something like, “But you said earlier that you were claiming critical and postmodern traditions. Wouldn’t one want to tear that functionalist house down and the other question the foundation of houses in the first place?”

The student just stared at me with an expression like: 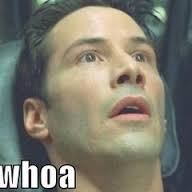 And I realize now that was probably my expression, at least internally, all semester.

Teaching a grad class was SO WEIRD. Fun at times, but weird. So often I felt a little out of body about being a professor, teaching a GRAD CLASS, marveling that it was actually happening. (The awe and wonder was compounded by the fact that I taught my first class in a room where I took classes as a master’s student 10 years ago.)

Part of the strangeness also stemmed from having such a small population. I had only three students formally enrolled with two auditing, which created a difficult dynamic in terms of reading/discussion responsibilities.

Grad seminars are all about participation, and the pressure is way higher in smaller classes. It’s evident when someone hasn’t done the readings because there’s nowhere to hide. And with two auditing (meaning, they were participating in class voluntarily, but not enrolled for credit), the pressure only increased. (Hindsight? I probably wouldn’t allow that situation again.)

Add to the mix the fact that the students ranged in experience from a first semester student to two in thesis mode. I felt like I was working double over time to make the course material relevant and accessible to everyone.

Looking back, there are so many things I would do differently (and I will because I’m teaching another grad class in a few weeks!). The main thing: Not running the class like a mini-doctoral seminar.

My MA and PhD seminars experiences were largely similar—we read and discussed articles, listened to student discussion leaders and presentations, etc. So I figured the same thing would work for my org comm seminar, which it did, in part. But I definitely erred in my expectations of the students’ experience synthesizing and speaking about research.

All semester, I was chagrined at how my students would talk about what the article was not, which groups of people it did not include, what subjects it did not focus on, using a single critique to avoid talking about the whole article. Or they would home in on a couple tiny details, and miss the greater contributions. A lot of times, it was like being stuck with a pack of Reviewer 2s, if you know what I mean. (Super fun when you had them read one of your own articles, by the way).

And I realize now that figuring out how to read and talk about research is a major skill that I just naively assumed they would know. Why, I couldn’t tell you because I distinctly remember floundering during my early years and not really “getting it” until well into my doctoral program. It’s not something we get taught, per se.

So next semester, I’m structuring discussions and activities to help students better identify and articulate the contributions of articles. And I’m planning assignments that help them master the literature broadly (the point of this level of grad school). Hoping these tweaks make our discussions more interesting and productive. We’ll see!